Goose and Honda: A Love Story

One bird in love, one Honda.

I love my Honda Accord the way anyone might love a car. It’s fuel efficient and trouble-free. It was my late father’s car, which makes it particularly special to me.  Gauging by how many other silver Accords try to confuse me in parking lots, plenty of people also love these cars.

But not the way Louise loves my car. Her love is notable for its dedication. Louise won’t leave the side (or the front) of my car from sunup to sundown.

Louise, I should point out, is a goose. A Toulouse goose. This bird was left in a nature preserve where park regulations don’t permit domestic animals such as Louise. So she had to go. She was nabbed, stuffed in a bag, transferred to a cage, and brought here by our daughter (a biologist at that park) to live on our pond. A few days earlier another waterfowl had arrived here the same way, a duck we named Alice.

Louise and Alice hit it off.

They swam in peace, nibbled on grasses, snacked on the cracked corn we left out for them.

Many mornings they were joined by wild ducks.

Some mornings they received visits from a fawn. 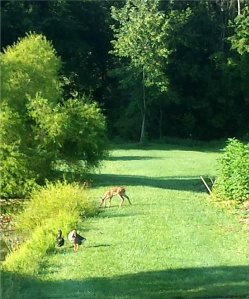 Fawn on a fowl visit.

Even after Alice matured enough for us to notice that she was a male duck, now known as Al, they enjoyed what appeared to be a bliss-filled fowl existence.

Sounds idyllic doesn’t it? (Except for the honking. Louise is not a quiet creature.)

Then one day, everything changed.

Louise spotted a distant glimmer.  It was so alluring her wide orange feet quickly pitter-pattered up to the front yard. There she saw Honda for the first time, his shiny surface and tempting shape alluring in ways only a goose of her caliber might recognize. She hurried up to this vision, this Honda of her dreams, and there she stayed. All day she strolled around the car, sometimes making quiet murmuring tones, sometimes tapping gently at it with her beak.

At night, humans herded her out to the pond to keep her safe from predators. One evening they didn’t wait until it was dark enough. She rushed back to her sweet Honda minutes later. The humans had to wait until the sunset faded to black, but not until Louise tried to convince the car to follow her to the pond. Car remained the strong silent unmovable type. After some despair-laden honking Louise allowed herself to be herded back to the pond, wings flapping in protest and feet slapping the ground with angry flip flop sounds.

Now every day Louise stands next to her true love, Honda. She perseveres despite mail carriers and rain and annoying small dogs.

She’s only mildly curious about a Civic that’s sometimes parked next to her beloved Accord, mostly ignoring it.

A lesser goose might choose an easier life. One with a pond, food, and fowl companions. But not Louise. She remains steadfast. As my daughter, the goose rescuer, says,

But, soft! what light from yonder driveway breaks?
It is the headlight, and Honda is the sun!

Oh we’ve tried to break them up. She’s not interested in shiny objects placed nearby to distract her. She won’t look at a mirror we’d hoped to move incrementally closer to the water. She’s committed to living in the driveway with her Honda.

It seemed we had no other option but to find Louise a new home where her affections might turn to a fellow goose. We called the local extension office, sure they’d know of a nearby farm or 4-H kid raising Toulouse geese. No luck. The woman who answered the phone had herself once owned a Toulouse goose. It fell deeply in love with a discarded Christmas tree wrapped in a plastic garbage bag. Perhaps there’s something to the phrase “silly goose.”

Louise’s love has inspired us to sing songs like “When a Goose Loves a Honda” and “Here’s My Beak, Call Me Maybe.” But it’s not silly. It’s abiding and faithful, although unrequited.

19 Responses to Goose and Honda: A Love Story